Dunwoody students welcomed the cold temperatures and falling snow once again this past January as students competed in the ninth annual Institute of Navigation (ION’s) Autonomous Snowplow Competition.

The yearly event serves as an opportunity for universities, colleges, and the general public to showcase hand-built machines that can independently clear piles of snow without any manual control.

The College has competed in the competition since its inauguration in 2011 and has a history of placing well — with 2019 being no different.

This year, not only did students receive the Golden Smile sportsmanship award for the fifth year in a row,

Robotics & Manufacturing Dean and team coordinator E.J. Daigle said this year has been the team’s most successful year yet — both in terms of placement and program-diversity. The 2019 team featured students from four of the College’s programs: Automated Systems & Robotics, Electronics Engineering Technology, Software Engineering, and Industrial Engineering Technology.

A rapidly growing student club, Dunwoody’s snow plow teams have served as a selling point for many students.

“I visited Dunwoody for the first time during an Open House,” Electronics Engineering Technology student Nick Bornt explained. “And during a tour I was shown the snow plows. I knew from the moment I saw them that I wanted to be on the team.”

“I heard about the team, and once I saw the work they were doing — I knew I wanted to be a part of that,” he said.

The teams have been working on their snowplows since early September. Weekly team meetings included time spent studying, building, and testing the machines.

Huerta said the experience has been incredible and one he likely wouldn’t have gotten inside a classroom.

“Being a part of the team gives you an opportunity to work with cutting edge technology — things that tech companies are still working on,” he said. “It was really cool to use autonomous navigating technology and see exactly where it’s headed.”

But the team members will also be the first to tell you that despite months of learning about the technology, the machines still surprise you. During the final run of the 2019 competition, the Wendigo team experienced unexpected technical difficulties.

“We pushed the start button and it did nothing,” Bornt said. “Turns out that some component of our main controller got too cold and decided to not work when we needed it the most.”

Thankfully, Bornt explained, Software Engineering student Donald Posterick was able to modify the code on the team’s secondary controller. His quick thinking allowed the team to still compete in – and eventually win — the competition. 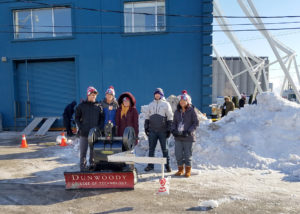 A new competition venue also added value to the students’ experience this year.

In previous years, the annual event has been held during the St. Paul Winter Carnival at Rice Park, here in Minnesota. But construction delays within the park forced the competition to be moved elsewhere. That’s when Sidewalk Labs, an Alphabet Inc.’s urban innovation organization, offered a new, snowy destination: Toronto, Ontario, Canada.

“Sidewalk Labs was given a tract of land by the city of Toronto to develop a model of the future city,” Daigle explained, adding that the city would include new models for pavement, building construction, traffic control, garbage removal, and — you guessed it — snow removal. “It was the perfect place to showcase autonomous snow plows,” he said.

Ten Dunwoody students and three faculty members were able to make the trek.

“Canada was the perfect place to host the competition,” Huerta said. “Toronto is really pushing to get autonomous vehicles and robots integrated into their city. It was great to see a place where our robots could end up someday. It made our ideas and concepts feel a lot closer to becoming a reality.”

And while seeing a new country and winning the top prize in the competition were highlights in themselves, Dunwoody students found greater fulfilment in once again receiving the competition’s sportsmanship award.

Created by ION in 2012, the annual award is presented to a team that exhibits notable sportspersonship throughout the competition.

The award was later named the Dr. Nattu Natarajan Golden Smile Award after University of Michigan-Dearborn professor and competition leader Dr. Narasimhamurthi (Nattu) Natarajan. Nattu passed away from a lung illness on the Saturday morning of the 2016 competition.

“The sportsmanship award is an award we strive to get every year,” Huerta said. “Not because we want awards, but simply because we love to work together with other schools and help them as much as we can. 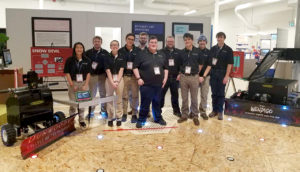 “The worst thing that can happen at the competition is to spend all year working on your robot and travel all the that way only to have the robot not work.”

Daigle credits the team’s open communication and volunteerism as reasons for receiving the award again this year, explaining that they were quick to share tips with other teams, lend tools, and even shovel snow due to the lack of event helpers.

“By far my favorite part of the event was seeing our students working with the other teams to overcome challenges and help ensure the competition was a success,” he said.

The team hopes to receive the award again in 2020.