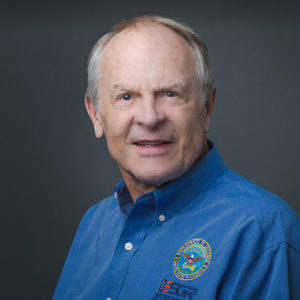 Brigadier General (ret) Dennis Schulstad distinguished himself in three careers. He was a 22 year elected member of the Minneapolis City Council (the only and last Republican); a successful political campaign consultant to candidates for U.S. Senate, Governor, State Legislature and other offices; and an officer in the Air Force Reserve retiring as a Brigadier General.

In “retirement” Denny is a member of several non-profit boards and commissions. He was appointed by the Secretary of Defense to be the Minnesota State Chair of Employer Support of the Guard and Reserve (ESGR) where he selected, trained and led 125 volunteers (mostly attorneys and business executives) to assist mobilized military members with their civilian careers. The program won numerous national honors and awards during his unprecedented seven years as state chair.

He is a founder and emeritus board member of the Minnesota Military Family Foundation, an organization that has raised over $6 million to distribute to families of military members facing financial difficulty due to a deployment. He is a founder and the president of Minnesotans’ Military Appreciation Fund that has raised over $19 million and gives grants of $500 to $10,000 to all MN military members (active, guard and reserve) who have served in a combat area after Sept. 11, 2001.

He is the former president of the Airport Foundation, a group that provides all travelers assistance, armed forces service center, art, music, landscaping and anything else that makes the airport a more friendly and easy to use facility. He is also a trustee of the Air Force Academy Falcon Foundation.

General Schulstad is the former National President of the 63,000 member University of Minnesota Alumni Association. He also served for ten years as a board member of KARE-TV (NBC affiliate) Eleven Who Care program that recognizes the top volunteers in the community. Denny was the Commodore and President of the Minneapolis Aquatennial, a local festival that promotes the city and many lakes with over 1,000 volunteers and 500,000 spectators and an annual budget exceeding $5 million.

He chaired the committee to design, build and finance the Veteran Tribute (a $500,000 wall and stage with “thank you for our freedom” carved in stone) at the University of Minnesota football stadium.

General Schulstad’s military duties were primarily spent as a mobilization assistant with the active duty force. He served at Headquarters for Fifteenth Air Force, Tactical Air Command and Air Combat Command. His duties included Public Affairs and he worked closely with the integration and utilization of Air Reserve forces into the active duty structure.

He spent over 25 years as an additional duty Air Force Academy Liaison Officer and as the Congressional Relations Officer and Commander of the Minnesota ALO program. He retired in 2000.

As the most recognized Air Force person in Minnesota, he is invited to give over 50 speeches each year at civic and ceremonial programs and is often interviewed by various media outlets.